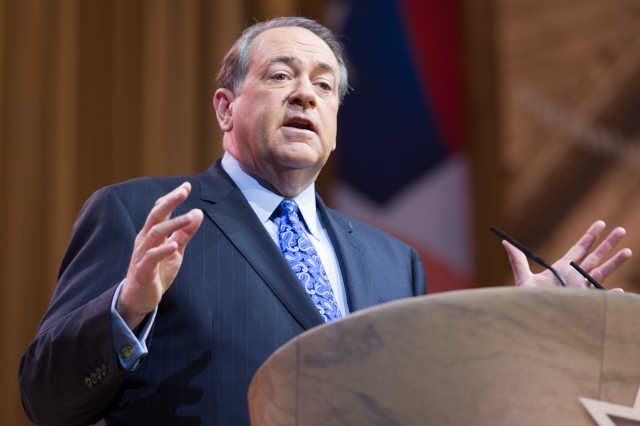 (Tea Party PAC) – Here’s a story the mainstream media doesn’t want you to see and it’s pretty remarkable. This week the US Supreme Court is going to hear arguments in a case that could overturn the 2020 election and boot Biden, Harris and hundreds of Congress members out of office.

While the major news outlets refuse to talk about this story, former Arkansas governor and one-time Republican presidential candidate, Mike Huckabee, published a piece recently in an attempt to inform Americans about this potentially historic case.

Brunson v. Adams is set to be heard by the US Supreme Court starting Friday, Jan. 6. A fitting date for such an argument to be heard considering it is the second anniversary of the Jan. 6 debacle.

The plaintiff/appellant, Raland Brunson of Ogden, Utah, and his three brothers are seeking the removal of Joe Biden from the presidency along with Kamala Harris and any member of Congress who refused to take allegations of fraud in the 2020 election.

The argument being made by the Brunson brothers is that members of Congress failed to uphold their constitutional duty to protect the US from all enemies “foreign and domestic” on Jan. 6, 2021, by not investigating election fraud allegations.

“Sit down; I guarantee this Supreme Court story is real,” Huckabee wrote.

“The Supreme Court has agreed to a hearing for a case that could conceivably — PLEASE consider this the longest of long shots — overturn the election of 2020, throw out all the legislators who voted to certify the results and leave them ineligible to run for office ever again, even for town dogcatcher,” he explained.

The Brunson brothers’ argument is actually pretty smart. They’re challenging the procedures that took place rather than trying to prove fraud and interference took place during the 2020 presidential election.

They’re arguing that the 388 lawmakers named in their lawsuit took an oath to support and defend the US Constitution “against all enemies, foreign and domestic.”

Yet, they “purposely thwarted all efforts to investigate [allegations of fraud in the 2020 election], whereupon this enemy was not checked or investigated, therefore the Respondents adhered to this enemy.”

The Brunsons recounted in their petition to the Supreme Court, “On January 6, 2021, the 117th Congress held a proceeding and debate in Washington DC (“Proceeding”). This Proceeding was for the purpose of counting votes under the 2020 Presidential election for the President and Vice President of the United States under Amendment XII.”

“During this Proceeding over 100 members of U.S. Congress claimed factual evidence that the said election was rigged. The refusal of the Respondents to investigate this congressional claim (the enemy) is an act of treason and fraud by Respondents,” the brothers continued.

“A successfully rigged election has the same end result as an act of war; to place into power whom the victor wants, which in this case is Biden, who, if not stopped immediately, will continue to destroy the fundamental freedoms of Brunson and all U.S. Citizens and courts of law.”

Huckabee pointed out, “The argument in this case is that by not looking into serious allegations of election fraud, those who voted to confirm the results of the 2020 election broke their oath of office and are ineligible to run for any elected office again. To give you an idea of the scope of the potential fallout, Kamala Harris is in that group, and so is Mike Pence.”

Before now the US Supreme Court has avoided getting involved in the 2020 election, refusing to hear any cases regarding the matter. The Brunson brothers’ argument is different, however, in that it’s not actually trying to prove the election was rigged but is instead alleging Congress members failed to do their job.

The case, however, had been dismissed at the federal district court level in February without going to trial. It will now be heard by the nation’s highest court.

Tim Canova, a constitutional law scholar and professor at Nova Southeastern University’s Shepard Broad College of Law in Florida, opined in a commentary last month as to why the Supreme Court might have decided to hear the case.

“It seems astounding that the Court would wade into such waters two years to the day after the Congressional vote to install Joe Biden as President. But these are not normal times,” Canova wrote.

He cited the criminal referral by the sham Jan. 6 committee for President Trump and the FBI’s now-exposed, undeniable collusion with Twitter and Facebook with the intent of influencing the election by suppressing the Hunter Biden laptop stories, in violation of the First Amendment, as examples of the abnormal times we are living in.

“Supreme Court Justices may well see these approaching storm clouds and conclude that the Court’s intervention is necessary to prevent larger civil unrest resulting from constitutional violations that are undermining public trust and confidence in the outcomes of both the 2020 and 2022 elections,” Canova asserted.

Of course, as Huckabee stated, Biden, Harris and over 350 Congressmen and women being thrown out of office is a long-shot but the fact that the SCOTUS is hearing the case should be enough to give Americans a little hope.

Huckabee further reminded his readers, however, not to get their hopes too high.

“Even if a majority of the Justices found merit in this case, would they be willing to do something this huge?”

Huckabee concluded, “But you know the saying, if something sounds too good to be true, it probably is.”

Keep an eye on this case but try not to get carried away with the hope that the SCOTUS is going to miraculously make everything right. We’re very likely going to be stuck with Biden, Harris and the rest of the swamp for at least another two years.