(Tea Party PAC) – Former Vice President Joe Biden, who is currently running for the Democratic Party’s presidential nomination, recently made a claim about the Obama administration’s immigration policies that is absolutely, positively not accurate by any stretch of the imagination.

He claims that they didn’t lock people up in cages during this particular time period. Again, this is totally false. Perhaps Crazy Uncle Joe has a few screws loose in the memory compartment of his brain?

Or he just conveniently sets aside anything that is politically inconvenient for him and his political aspirations.

Biden claimed that the Obama administration’s policies were more humane than those of President Donald Trump: “We didn’t lock people up in cages,” he said.

In fact, the “cages” were built by the Obama administration to deal with a surge of unaccompanied minors who crossed the border illegally in 2014.

Originally, the Obama administration was “warehousing” children — literally — in overwhelmed Border Patrol facilities. Breitbart News broke the story of the surge, which was partly triggered by Obama’s policy of allowing illegal alien children who entered the country as minors to stay in the country (Deferred Action for Childhood Arrivals, or DACA). 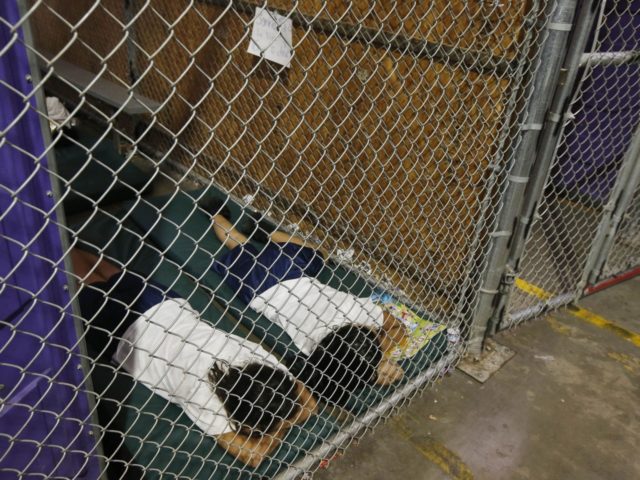 The above photo was published by the Associated Press in June 2014, and the photo below is of Obama’s Secretary of Homeland Security, Jeh Johnson, touring a Border Patrol facility with “cages.”

The “cages” are chain-link enclosures in Border Patrol processing facilities that are meant to protect children from adults in custody. They are not permanent accommodations.

In mid-2018, as the Trump administration began enforcing a “zero tolerance” policy that stopped the “catch-and-release” policy of letting illegal aliens go after they were arrested. Detaining adults and children meant that children had to be processed separately; the enclosures prevented adults from harming children.

As Breitbart News reported at the time, children were not housed in “cages.” They were processed and then taken to shelters, where they were given medical care, toiletries, education, recreation, and counseling, and where staff attempted to find relatives or sponsors to whom they could be released.

Democrats began tweeting images of “kids in cages” to condemn the Trump administration. Journalists, too, shared those images.

One problem: they were taken during the Obama administration.

This should plainly reveal the kind of tactics the Democratic Party is employing to try and defeat Trump in 2020. See, the left doesn’t actually care about truth or facts. Those things are maleable to them.

What they care about is narrative. They know and understand the power of story and the effects storytelling has on the human heart and spirit. Thus, they try and take bits and pieces of different “truths” and put them together in a story that matches the narrative they want to create.

The left believes if they convince everyone Trump is a racist he will most certainly lose next year’s election. Thus, they wanted to push this whole “kids in cage” crap to try and back up that narrative. However, it wasn’t Trump who did this. It was Obama.

Liberals were counting on voters being ignorant and not digging too deep into this whole situation. Well, they were wrong. Folks did dig into and the truth has been revealed.

You Won’t Believe Who Clint Eastwood Just Endorsed For President…Give Me...

The Reason This Couple Ran Teenage Brothers Riding Bicycles Off The...